Many of you will have heard about Madeira Wine, before you even realised where this precious nectar actually comes from, as it is undisputedly one of our most famous treasures.

George Washington toasted the declaration of independence with a glass of Malmsey, and President Obama continued the tradition. Even Shakespeare mentions it in one of his plays! 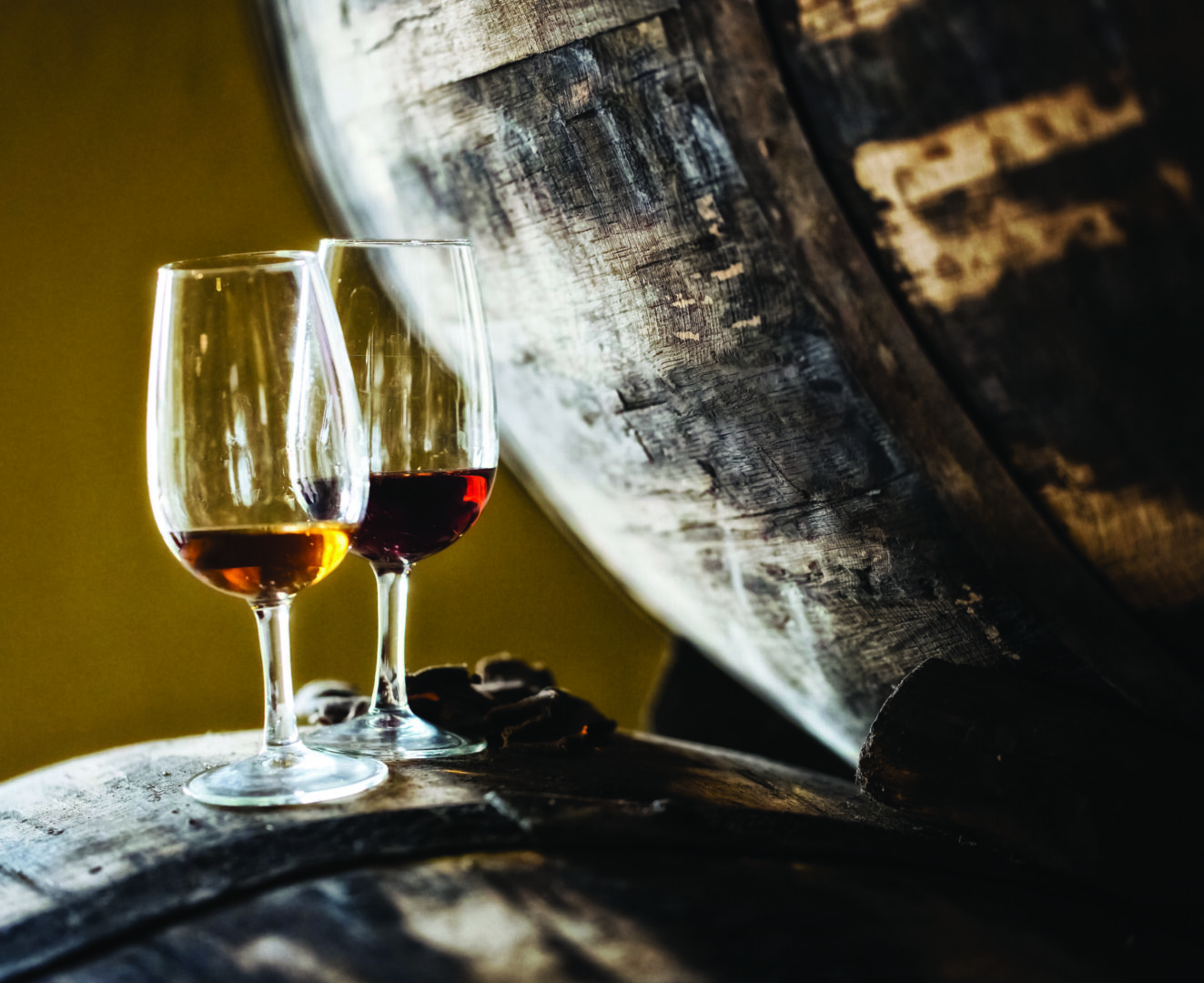 It is a very special product, and like many delicious foodstuffs, it was discovered by accident.

Madeira Island was discovered 601 years ago by Portuguese mariners and quickly became a very welcome stop for ships on their way to the African, American and Asian continents. One of the main diseases that could come as a consequence of months at sea without fresh produce was scurvy, caused by a diet deficient in vitamin C. So sailors needed medicine, and what better source for vitamins than grape juice? Well… in their humble and well intentioned opinion, wine was the best way to keep scurvy away.

So the portuguese settlers began to plant vines on the terraced slopes of the island to supply the demand for wine on passing ships, who also needed it for ballast and for trading. Experience, and holds filled with barrels of vinegar, had taught them that ordinary still wine could not withstand the journeys, so they stabilized it with a stronger alcohol, at the time, brandy or rum. 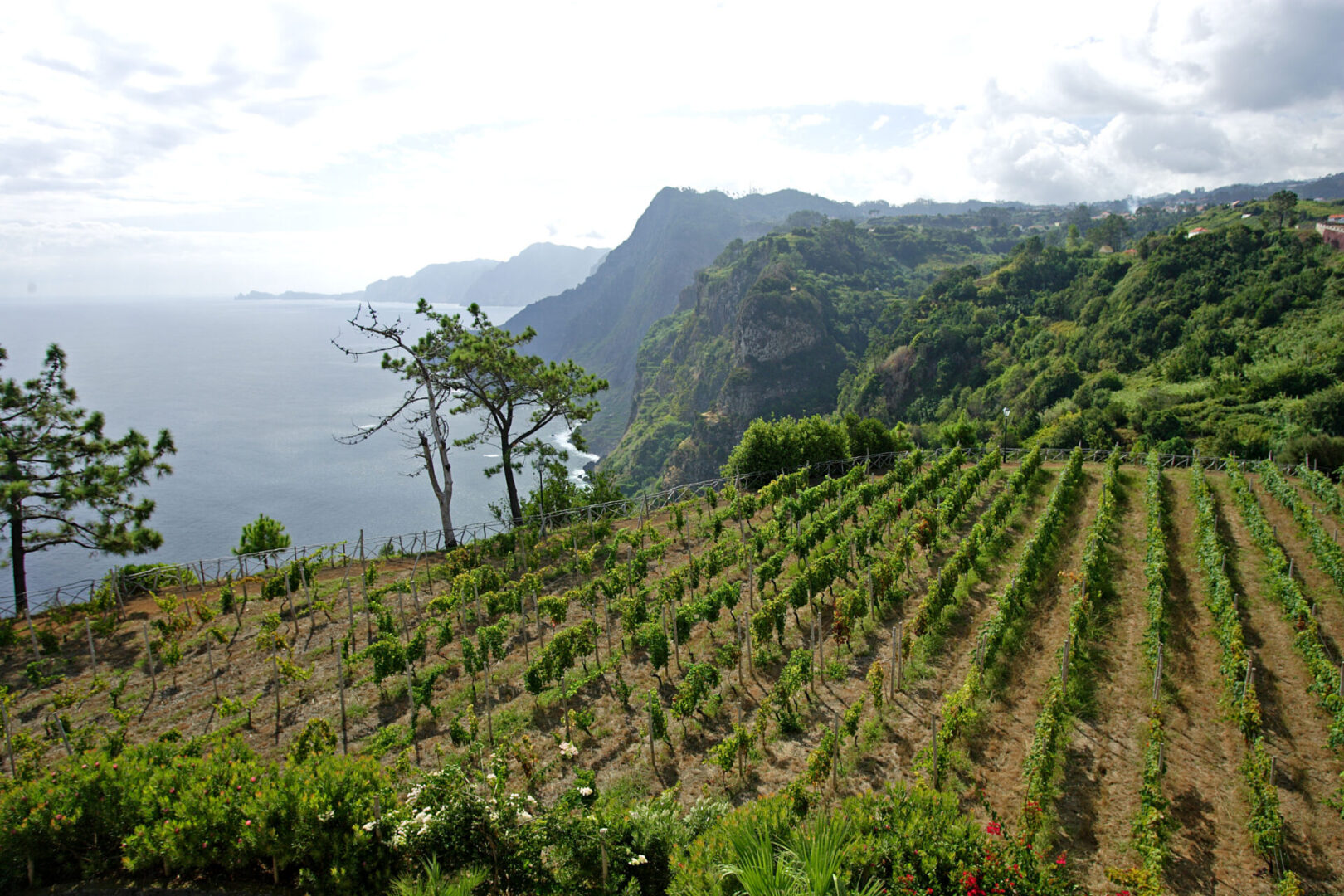 And then off they would go: down the coast of Africa, over the equator, round the Cape of Good Hope, over the Equator again, all the way to India. They needed their vitamins for the way back, so they still had some barrels on the return: along the coast of East Africa, over the Equator, round the Cape, over the Equator again and all the way back to Madeira Island. Sometimes, there was still some wine in the barrels and the captain would tell the crew to throw it away, but….who ever heard of a sailor who throws away wine? Of course not! So they tasted it and were pleasantly surprised that it tasted even better than when it had started the journey. However, it was expensive business to take a hold full of barrels of wine all the way to India and back, so they decided to try to replicate the process in Madeira. At first, they thought it was the motion of the sea that improved the wine, so you would see a dozen men rocking these barrels back and forth. They even invented a steam machine to do the rocking for them, until they realised it was not the movement but the heat that worked its magic on the wine.

That is why you will never find Madeira Wine aging in a cellar: it is always kept in the warmest rooms in the house, the youngest wines taking the attic and then gradually being brought down the levels of the house in order to age at a more leisurely pace. 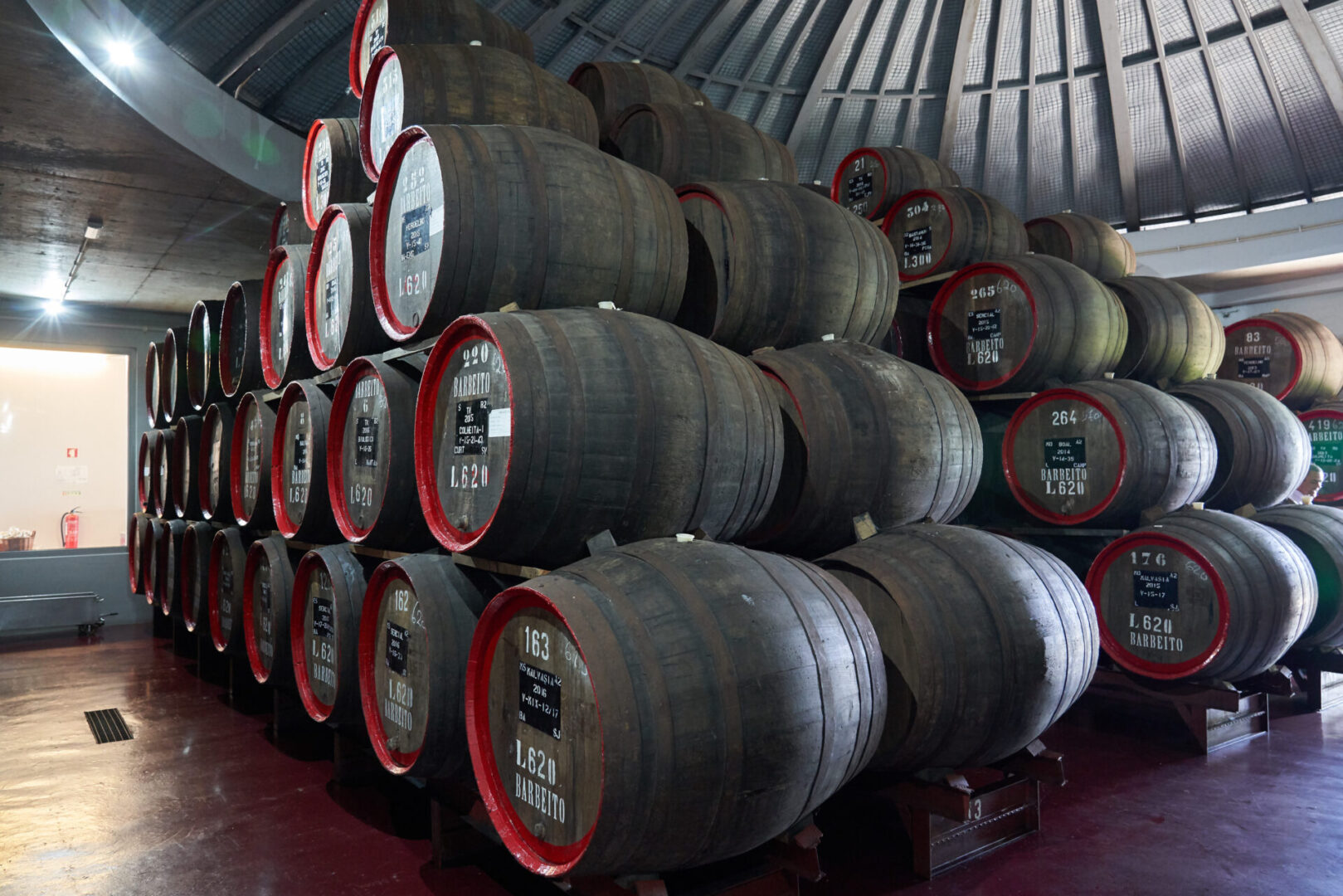 We have four styles of Madeira Wine: Dry, Medium Dry, Medium Sweet and Sweet. Traditionally these are made with, in the same order, Sercial, Verdelho, Boal and Malvasia, or Malmsey grapes. There are also two much rarer grapes called Terrantez and Bastardo.

However, in the 19th century Madeira Island suffered two disastrous attacks of Oidium and Filoxera which killed almost all the vines on the island. They then discovered that there was another vine that was much more resistant to disease, Tinta Negra. As you can imagine, it takes generations to overcome a calamity such as that, so even today, Tinta Negra accounts for around 85% of the total production of grapes on the Island. And though it used to be looked down upon as not being one of the noble grape varieties, not even appearing on the label of the wines made from it, Tinta Negra has slowly come into its own and now we can even see Frasqueiras (Vintages) made with Tinta Negra.

Over the years they discovered that this grape was a chameleon, and that they could make all the styles of Madeira Wine (Dry, Medium Dry, Medium Sweet and Sweet) using Tinta Negra, simply by crafting the production process.

To explain: Madeira Wine is made like all wines up to a certain phase of the process. Grapes are picked, then pressed, and then allowed to ferment. Depending on the style desired, the time of fermentation varies: 48 hours if making a sweet wine, or up to ten days to make a dry one. And that is how they control the Tinta Negra to make the different styles.

Then comes the fortifying of the wine, when a stronger alcohol is added to stop the fermentation. And here is another unique aspect of Madeira Wine: in other fortified wines, like Port, Sherry or Marsala, the alcohol used for stopping the fermentation is usually under 77% strong, in Madeira Wine it is 96% strong! So it completely kills the yeast. 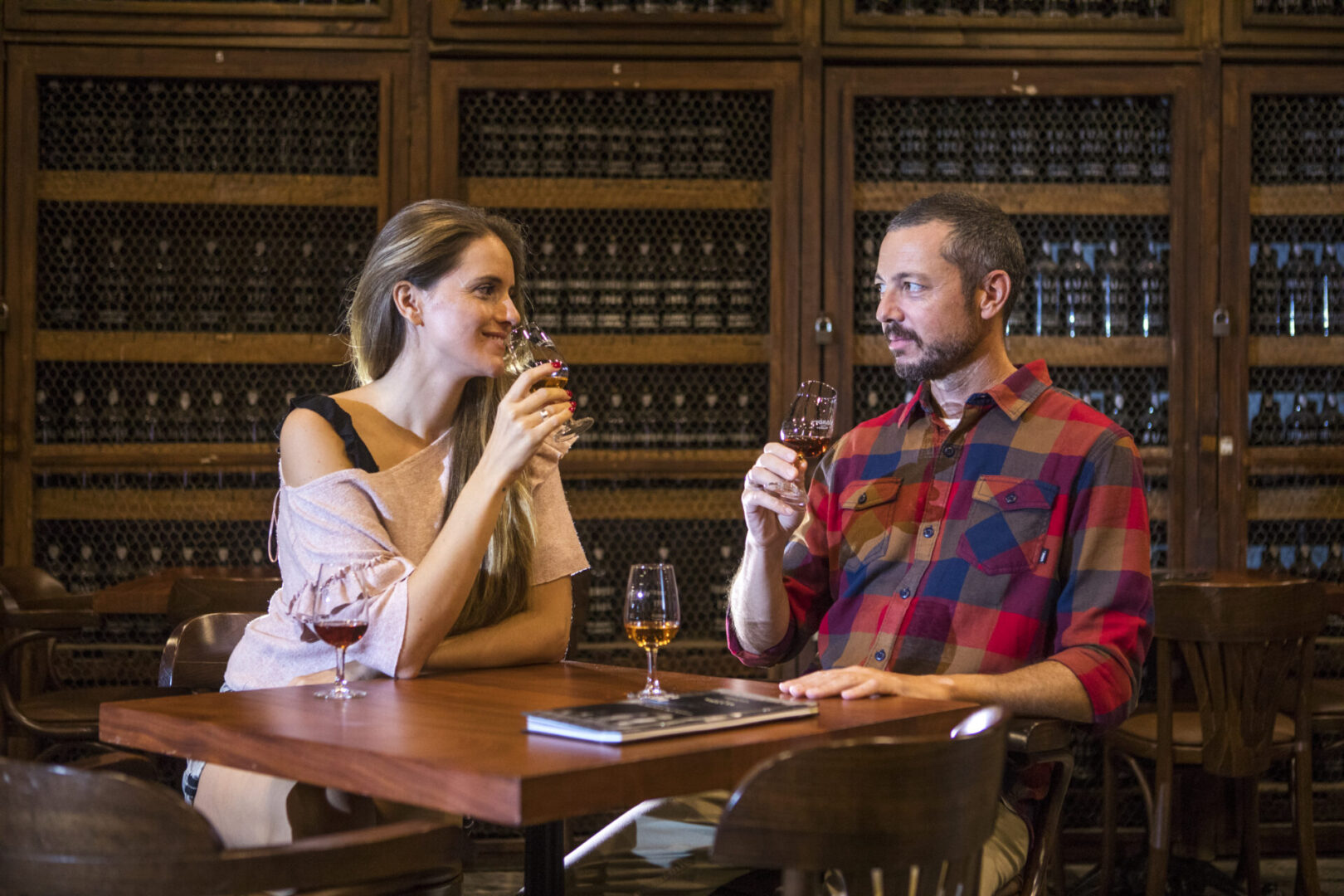 Then comes the magic portion of the production process: we torture the wine! Everything that wine makers do not want their wines to undergo, we do to it: namely, heat and oxygen.

We age the wine sometimes for decades, or even more than a century. But all this means that when the wine is finally bottled, nothing more happens to it, there is no further development. They even say that you can open a bottle and have it open for a whole year and it is still perfect! Though we have to say that it is very very rare that that happens as we drink it all before testing that theory!

And that is why Madeira Wine is considered the longest lasting man made food product in the world, only bees can outdo it with their delicious honey.

You might be baffled when you look at the shelves selling Madeira Wine though, as there is much to choose from. First come the blends: 3, 5, 10, 15, 20, 40 year old wines are blends of differently aged wines of the same grape variety, the number of years on the label stating the average age of the wine. Then come the Colheitas (Baby Vintages), which have a single grape variety and come from a single harvest, and have been aged in the oak casks for anywhere between 5 and 18 years. Finally, we have the Frasqueiras, which are in those black bottles with the year and the grape stencilled on in white paint. These are single grape, single harvest, and have been aging in the cask for at least 20 years. 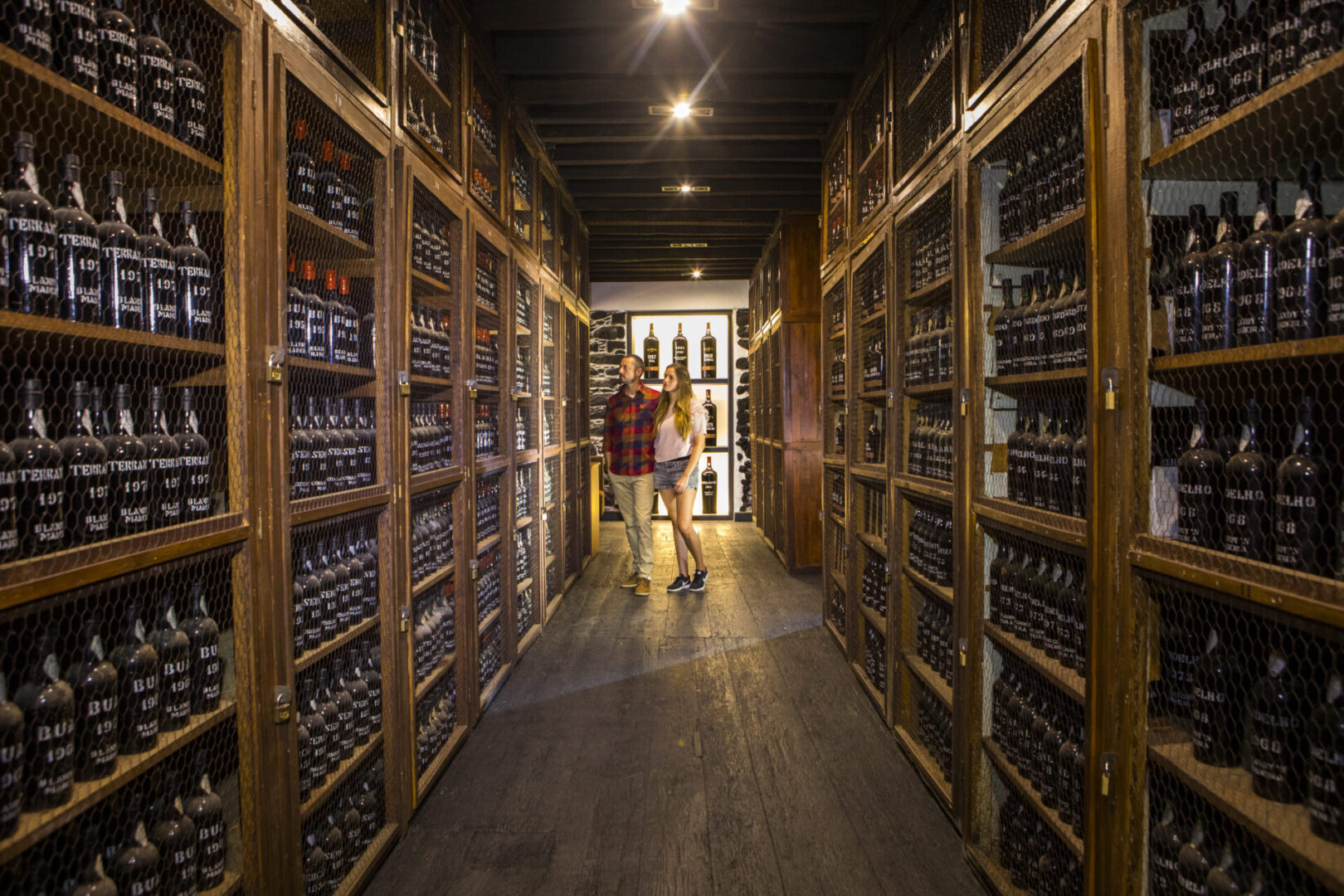 Madeira Wine, much like the tourism on the Island it comes from, had the fame of being a sipping wine for older people, but that has changed a lot in recent years. Chefs all over the world are discovering new ways to pair these exquisite wines with the treats they put on our plates.

Sercial, being the driest, as a rule, goes exceptionally well with sushi and marinated fish. Verdelho is delightful with a fish soup, a prawn curry or even a grilled tuna steak. Boal is the perfect combination with hard cheeses or dark chocolate mousse. Malvasia goes beautifully with passion fruit pudding or a crème brûlée.

This delightful product is a huge part of our landscape, our culture, our history and our economy. So when in Madeira, please take some time to visit the different producers and taste as much as you can of it (there are currently 8* companies making Madeira Wine). Some have guided tours which can enlighten you further on the way it is made, and some also offer visits to the vineyards. Or you might even want to go on a full day wine tour which is a wonderful way of getting to know some of our Madeira Wine producers and also some of our still wine producers, which is something relatively new on the island! 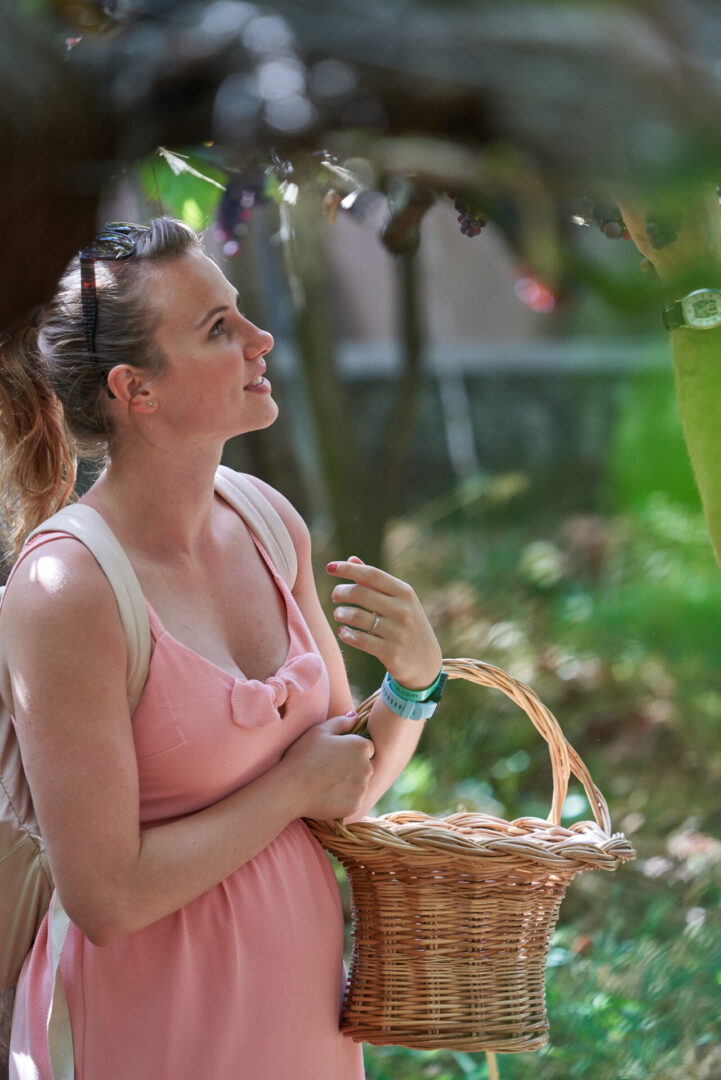 If you are here in September, you will love the Wine Festival, which offers many different activities (picking, pressing, cooking, tasting, pairing,…) and fun festivities and lots and lots of wine!

(To your health, cheers!)